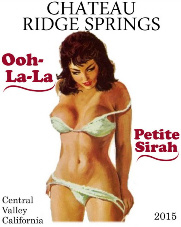 Ooh-La-La says it all for this California Central Valley Petite Sirah (aka Durif).  We’ve produced other Petite Sirah wines from California, and we’ve found them to be rich and full of flavor.  Ooh-La-La promises the same, with a light hint of vanilla from the American oak used during fermentation.  This production was a bit smaller than others, yielding just two cases.  But, that’s two cases of purple, yet supple, pure joy.

Once again, as we work to find something that rhymes with “sirah,” we draw from the surfeit of romance novels produced in the post-war era to find a Robert Bonfils illustration of a sultry young lady — doing what we all like to see — undressing!  So, grab a bottle of Ooh-La-La, find the closest sultry young lady, pour a glass, and do some undressing yourself! 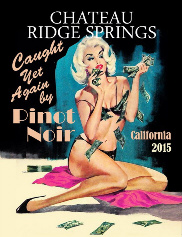 Caught Yet Again by Pinot Noir is produced with grapes from Lodi, California – The Doc Harris Ranch located in Lockeford.

With a nose reminiscent of black cherry, raspberry or currant, Caught Yet Again by Pinot Noir connotes the quintessential qualities of the Pinot Noir grape.  The grape has color when young, often compared to that of garnet, is often much lighter than that of other red wines. This is because pinot noir has relatively small amounts of red pigment due to its thin skin.

Caught Yet Again by Pinot Noir, another in the caught series for the master detective, Pinot Noir, inspired us to find a Charles Copeland painting for a 1962 Elliott Chaze Novel called, “One for the Money.”

So, while conducting your own sleuth work, don’t forget to open a bottle of Caught Yet Again by Pinot Noir and dream of you, a glass of wine, and a beautiful women throwing around somebody else’s money!

So, for our label, we chose an illustration by Robert McGinnis for a Perry Mason novel called The Sun Bather’s Diary.

We recommend you take a bottle of A Cool Beach Breeze, find a blonde and a beach, and experience the breeze!

The Voyeur is yet another in our growing stable of Australian Shiraz wines.  This one is big, dry and intense. Slightly spicy with white peppery bouquet, The Voyeur has intense flavors of black currants, black berries and plums.

For the label, we chose a 1962 cover of  Jim Turner’s By-Line, Mona Knox, because it’s obvious that Mona is a sultry goddess, and her exposés are no doubt exposing.  Much like Mona, The Voyeur exposes the sexy and alluring secrets this Shiraz reveals from the unique Australian terroir.

Enjoy The Voyeur with grilled pepper steak or bacon-wrapped beef tenderloin, but don’t forget to invite your very own version of Mona and expose some secrets of your own! 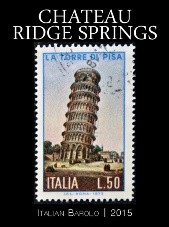 Barolo is described as one of Italy’s greatest wines.  So this got us thinking about other great things found in Italy.  So, we searched our world stamp collection and found the perfect complement — the leaning tower of Pisa (La Torre di Pisa).

The Death Grip is the first Zinfandel-Shiraz we’ve produced.  Sourced from some of the best vineyards in California, this popular blend makes a great wine for any occasion.  Zinfandel’s fruity red characteristics of raspberry jam, cranberry, black cherry and licorice blend well with the black currant, blackberry and pepper notes found in Shiraz.

For our label, we chose a print from John Massé’s Girls in their Undies vs. Zombies Art Series, because the “Z” in Zinfandel reminded us of Zombies.  Plus, we never miss a chance to have a scantly-clothed girl on our label.

So, grab a bottle of The Death Grip, find a girl who can bust Zombie heads with a baseball bat, and settle down for a taste sensation. 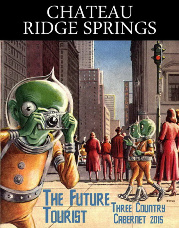 As The Future Tourist comes from different countries, it’s clear he (or she) needed a passport to get from one to another, just like any other tourist.  With the future in mind, and since it can take years for wine to mature, we chose the cover from the 1952 August edition of Galaxy Science Fiction magazine, illustrated by  Ed Emshwiller.

While we don’t know what the future tourist might look like, we’re betting they will come to love wine.   So grab a bottle of The Future Tourist, and book a trip to some where exotic.   But watch out— you could find yourself in somebody else’s family vacation album! 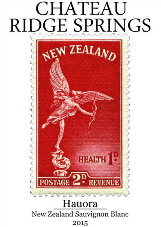 Naturally, we think that wine is good for us in all of these dimensions.  When we located a New Zealand health postage stamp, we knew it would be perfect for the label.

The idea for health stamps in New Zealand originated in the 1920s, where half the proceeds went to disease cure or prevention and the rest to promoting public health.  So, for a stamp purchased for 2d, one penny would go toward postage; and the other toward public health.

This New Zealand Sauvignon Blanc is certainly healthy — with notes of gooseberry, asparagus, passion fruit, melon and citrus. Many of these aromas are carried through to the palate. Serve with goat cheese, asparagus, summer salads, chicken, sardines, and cedar planked sockeye salmon.