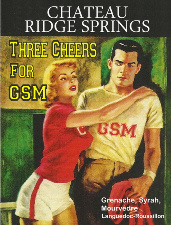 Three Cheers is the first GSM — the classic blend of Grenache, Syrah, and Mourvédre — we’ve made.  The grapes are from Gard, which is located on the west side of the Rhône river in the Languedoc-Roussillon region of France.  The French juices were augmented with Syrah from California to add New World body and depth to the traditional Old World Southern Rhône-style wine.

Fermenting on French virgin crushed grapes has produced a dark, toasty, and rather racy wine typical of the Rhône but with a kick from the New World.  Bright fruit and violet aromas define the nose.  Blackberry, black cherry, fig, cocoa, and licorice dance on the palate.  The finish lingers with more fruit, herbs, and a suggestion of spice and pairs well with chicken, pork, and roasted vegetable dishes. With age, Three Cheers will stand up well to grilled or roasted beef.

For our label, we chose the cover from Ernie Weatherall’s 1957 paperback, Rock ‘n Roll Girl, because our GSM is racy, and generally a bad girl who needs a bit of Rock ’n Roll love. 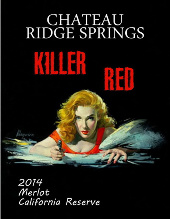 We decided to call this Merlot Killer Red, because we expect this wine to be great.  Really great.  Killer great.

The juice for Killer Red was sourced from California and  fermented with virgin crushed California Merlot grapes. You should expect aromas of raspberry and cherry along with a subtle toasted note, then followed by flavors of raspberry and strawberry. Gentle tannins and well-integrated oak contribute structure to the fruit-driven profile without being too aggressive. Killer Red should show its true character in about 6 months, but will continue to develop for at least a year. This soft red will stand up to red meats although it will pair well with roast chicken.

For our label, we chose another Robert Maguire painting of a woman in red pointing a gun right at the observer. We suggest that if you’re going to reach for anything that you do it slowly, and what you reach for should be a glass of Killer Red.  Or the woman in red.  Tough call.  Well, you do have two hands, don’t you? 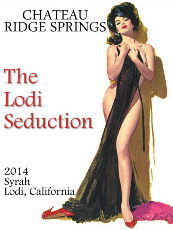 The Lodi Seduction represents Shiraz (as it’s known in Australia), French style: Syrah.  The grapes were harvested in the fall of 2014 from the Moralex Farm in Lodi, which is located in California’s Central Valley.

Lodi (pronounced LOHD-eye) was once known for Flame Tokay, a reddish-yellow, seeded grape.  Today, Lodi is known for many other varietals, headlined by Zinfandel, Merlot, Cabernet, and now Syrah.

This gregarious grape variety has taken the wine world by storm and is by far the number one red variety in Australia.  Its soft and supple texture coupled with the unmistakable white pepper spice make this wine unique. Depending on the aging, you will sense leather and tobacco tones after 2-3 years in the bottle.  Seduction was fermented in American oak and aged with French oak.

For our label, we chose the cover of a Hank Janson thriller, because the brazen seductress on it reminded us of the brazen character of New World Syrah and its ability to seduce us to partake in any action imaginable (and some actions that might downright hurt!). 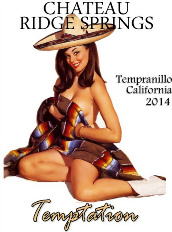 Temptation is our first wine from the Tempranillo grape. This Spanish Noble grape is the dominant varietal used in Spanish Rioja production.  Its name is the diminutive of the Spanish temprano (early), a reference to the fact that it ripens several weeks earlier than most Spanish red grapes.

The juice for Temptation was sourced from a place very different from northern Spain — Merced Acres of District 12 in Merced, California.  It wasn’t until 1905 that Frederic Bioletti brought Tempranillo to California where it received a cool reception due, in part, to the grape’s dislike of hot, dry climates.  Then, in the 1980s, Californian Tempranillo wine production began to increase due to the replanting of vines in mountainous sites where the grape could flourish.  Now, Californian Tempranillo is on-par with those grown around the world.

Temptation may be aged for several years or enjoyed well when young.  You will no doubt sense plum, berries, herb, leather, and Spanish olive on the nose and finish.

We chose our label art, because it’s obviously tempting to watch a young lady dressed in a sombrero; but sadly it is not as tempting as reaching for a bottle of Temptation! 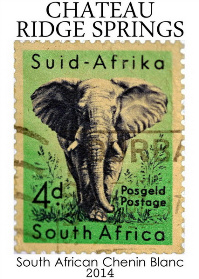 Suid-Afrika is the first Chenin Blanc that Chateau Ridge Springs has produced.  And, we thought it was high time we did so!  Chenin Blanc is well-known in South Africa as a grape of distinction.  This production has been unoaked, meaning that it is the Chenin Blanc grape itself that shines through in the character of this wine.

Nearly one-third of the vines planted in South Africa are Chenin Blanc.  Also known as Steen, Chenin Blanc produces a wine that is a very pale straw color boasting a nose of lemon-grass, melon and floral aromas with a slight kiss of honey. It is a dry, medium body white wine with crisp acidity and a clean citrus finish. Chenin Blanc serves as a great accompaniment to lemon chicken, mango salad, lobster bisque or something as exotic as pork loin baked with apples in brandy.

For our label, we chose a 1949 vintage stamp featuring the elephant, which is one of the Big Five mammals in South Africa.  Today there are over 10,000 elephants in Kruger National Park, compared to 120 in 1920.  The stamp also has Afrikaans Posgeld translated as Postage (Posgeld appears over the word Postage).  The value of the stamp (4ḍ) was ¼ penny, which in 1949 was enough to get a letter or postcard across the country. 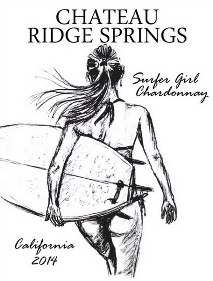 Surfer Girl is our first Chardonnay we’ve made with grapes sourced from California.  Located in San Joaquin County, Woodbridge is home to many great vineyards producing Chardonnay, including the grapes for Surfer Girl.

Fermented with American oak, Surfer Girl should put forth a nose of pears and a finish with a bit of butter.

For our label, we wanted something quintessential California, and the notion of sun, beach, and waves of Chardonnay came to mind.  So naturally, we chose a sketch called Spellbound by the Sea (© 2016 by Claire Britcliffe), of a surfer girl walking onto the beach to catch the next big wave. 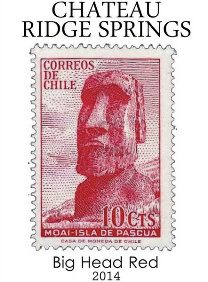 Big Head Red is the first Chilean Cabernet, Malbec, and Carménère red wine blend that Chateau Ridge Springs has produced.  While we’ve made Chilean Malbec and Shiraz blends,  it was time to add another member to the family.  This combination of Cabernet Sauvignon, Malbec, and the cousin to Merlot — Carménère — conspire to make a red wine that’s unsurpassed.  And, having these three big reds, we were a bit concerned that it could get a big head about itself!

So, Big Head Red  was born.  Starting with Cabernet — probably the most famous grape in wine making these days.  Throw in some Malbec, not new to the wine trade, but very South American.  Then, add a bit of the Carménère grape — sometimes mistaken for Merlot, and rarely grown in Bordeaux anymore, Carménère has become a Chilean mainstay.

For our label, we chose a 1965 vintage stamp featuring one of the Moai, the monolithic human figures carved by the Rapa Nui people on Easter Island — a Chilean Polynesian island — between the years 1250 and 1500 CE.  Almost all Moai have overly large heads three-eighths the size of the whole statue. 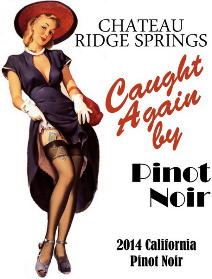 Caught Again by Pinot Noir is our third foray into wine from the Pinot Noir grape.  Finicky as it is, Pinot Noir grows best in only a handful of regions around the world.  Old world wines from the Burgundy region in France and as far south as Languedoc are probably the best known expression of Pinot Noir.  Recently, in the last thirty or so years, both Oregon and New Zealand have become major competitors; and they have all but stolen the Burgundian crown for wine made from this noble grape.

This vintage was sourced from vineyards on the coast of northern California, close to the Oregon border.

For our label, we chose a Gil Elvgren 1949 pinup called Socking it Away because it went with a film noir notion of being caught by a famous detective named, of course, Pinot Noir.  And, if you’ve been following our line of Pinot Noir wines, you know by now that our man, Pinot Noir, feverishly protects us from sexy young ladies making away with the goods!