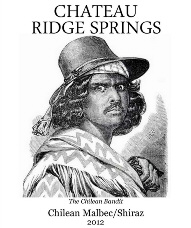 When we began making this wine, we thought about how our Chilean Malbec/Shiraz could possibly rob California of its reputation for world-class wine.  So, we named this wine after “The Chilean Bandit” (or The Robin Hood of El Dorado).

Born Joaquin Carrillo Murrieta (c. 1829 – c. July 25, 1853), Joaquin was a famous figure in California during the California Gold Rush of the 1850s.  Depending on your point of view, he was considered as either an infamous bandit or a Chilean patriot.

Well, we don’t want to be controversial, but we think this blend of 60% Malbec and 40% Shiraz is a steal.  Enjoy Malbec blackberry and plum with the spice of Shiraz kissed by vanilla imparted from French oak and topped with a hint of toast. We think you’ll like it so much, you might make off with a case!  Viva el bandido! 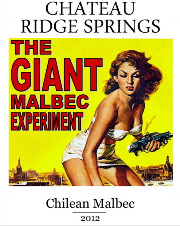 When a shipment of Chilean Malbec arrived unexpectedly, we had a decision to make.  We could make an average wine, or we could kick it up a notch or two.  Or, three!  So, we got right to work.  The first thing we did was get the fermentation going with grape skins, oak and a bunch of sugar (it’s the sugar that gets the bugs making alcohol).

Aged with French, American, and Hungarian oak, double-racked to “polish” it just right, this 100% Malbec is going to be so big and tall, it’s going to be a GIANT!  But in all our fervor, we had run into a problem.  A real problem.  A conundrum.  What should go on the label?  Our typical label just wouldn’t do for this grand experiment.

Inspired by B-Movies from the 1950’s, this label fits our experimental Malbec with great aplomb.  So, if you do see a 50 foot woman crushing cars, we recommend that you put the glass down. 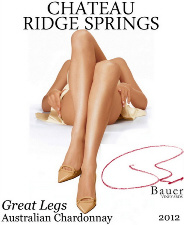 Chateau Ridge Springs and Bauer Vineyards has produced its first white wine.  Naturally, we wanted it to be special.  So, we thought of all the things we love.  Australia.  Wine.  Chardonnay.  And, there’s no denying it, great legs.  Frog legs, chicken legs, turkey legs, and never forget a couple of legs of lamb.

Nothing beats a great pair of legs.  Although, a glass of our Australian Chardonnay comes really close.  So, we thought, why not combine the two (or three)?  This Chardonnay has been fermented with medium toast oak, and aged with Hungarian oak.  Having a full glass of this Australian Chardonnay, combined with the image on the label, you can’t lose. 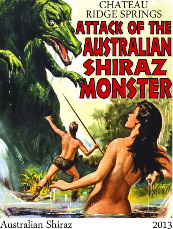 Aged with French and Hungarian oak, this 100% Australian Shiraz is big!  Really BIG.  It’s so big, it’s like a giant monster coming out of the swamp threatening to devour everything in its path!  So, we couldn’t put just any label on it.  We needed a label that would stand out just as much as the wine itself.  Once again, inspired by B-Movies from the 1950’s, we’ve made a monster of a pairing — and if you start seeing green, scaly monsters while sipping our wine, it might be time to save the rest for later.

This is the seventh wine produced at Chateau Ridge Springs, and we hope we’ve learned a thing or two since we started!  The 2012-2013 harvests were small, due to dry conditions in the east and storms in the west of Australia, producing concentrated wines. Our Shiraz is deep garnet and packs a punch of flavor with rich notes of cherry and vanilla.  Enjoy with steak and while watching swamps for monsters!